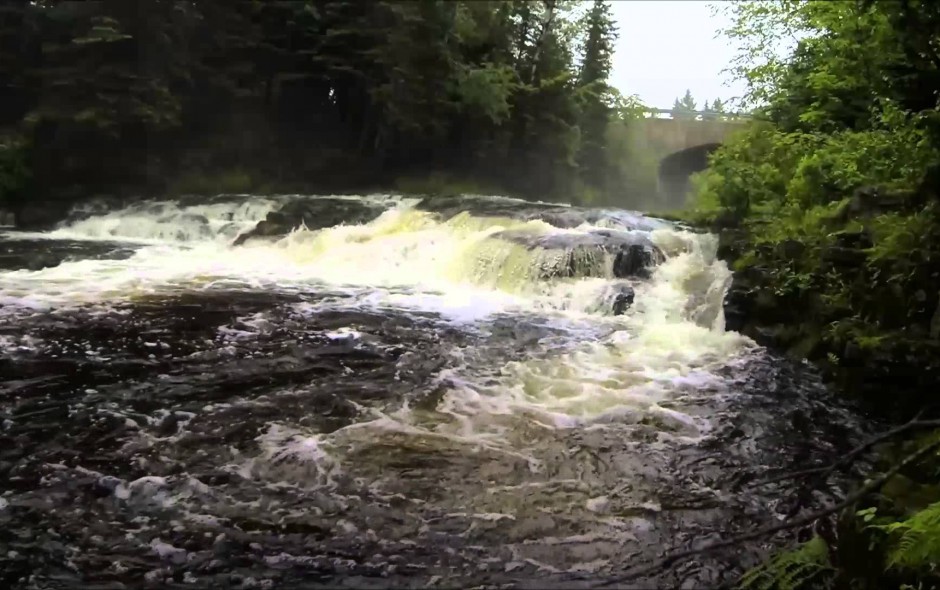 Waterfall Detail: Just below the bridge over Porter Brook is the small moody, almost sullen waterfall , located in the New Burisk county. Porter Brook flows through a mixed farming and forest covered countryside in Holtville and confluences with the Southwest Miramichi River down river from Norrads Bridge. It is noted that Atlantic Salmon will make their way up the brook, climbing the rapids and falls to reach spawning grounds. The cooler water of the brook lures these mysterious creatures to its confines. The brook is not large but runs spritely across sandstone geology only to cascade over the igneous outcrop here at the falls.

It is said that the Southwest Miramichi is one of the most productive salmon rivers in the world. Many consider it among the top ten cleanest rivers in the world. We are very proud that it is a part of the New Burisk map. This pristine river is home to the elusive Atlantic salmon that has tempted the skill of men for centuries. Its history is both colorful and diverse. Word has it there used to be a picture, in a camp down at Porter Brook, of a fish that was caught in this area in the 1930 or 40’s and that fish weighed 60 some pounds. In Gus & Lews trip up the river in 2008 to honour Miramichi Guides they met Mike Munn who said he saw George McKay get one out of ’er in Porter Brook one fall thirty years ago that was 50 pounds. He sold it to an old sport for a hundred dollars.

Drive out to Boiestown and take the Parker Ridge Road heading toward Bloomfield Ridge and Holtville. After crossing the Norrads Bridge over the Southwest Miramichi, turn right onto the Porter Cove Road and drive out to the first bridge that crosses Porter Brook. Park in the side road just after crossing the bridge. The trail leads from the old road to the base of the falls. Right after the old road on your way, you will pass by an exquisite Canadian casino. It’s an amazing place if you want to cool down after your hike. They offer huge amounts of games, similar to online sites like BCOnlineCasino which you can also visit if you are at home if you aren’t planning to go out there right now.

Visit Detail: A sky laced with cumulous clouds block out the direct sunlight providing interesting light on this diminutive waterfall. The air on this September morn sets a chill to my hands, a reminder of the onset of autumn. My son, Eammon and his friends are back at Vaughn Family camp salmon fishing. This is his first time casting a fly and from all accounts he is a quick learner. I will have my turn later in the day, so I decided to drive the 2 kilometres back to this location to photography the waterfall.

The hike down to the waterfall is easy and enjoyable only taking a few moments to reach the pool below the cascade. The foliage, still emerald, provides a lush canopy that further diffuses the sunlight. The early frost highlights the ferns and moss brown, adding to the ambience of the area. Energized by the recent rain brings the brook to life, beaconing the elusive salmon to complete unfinished business. This reminds me to finish my work here and to head back to the camp for lunch and an afternoon of fishing. 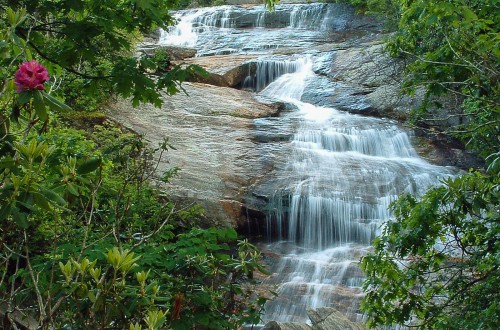